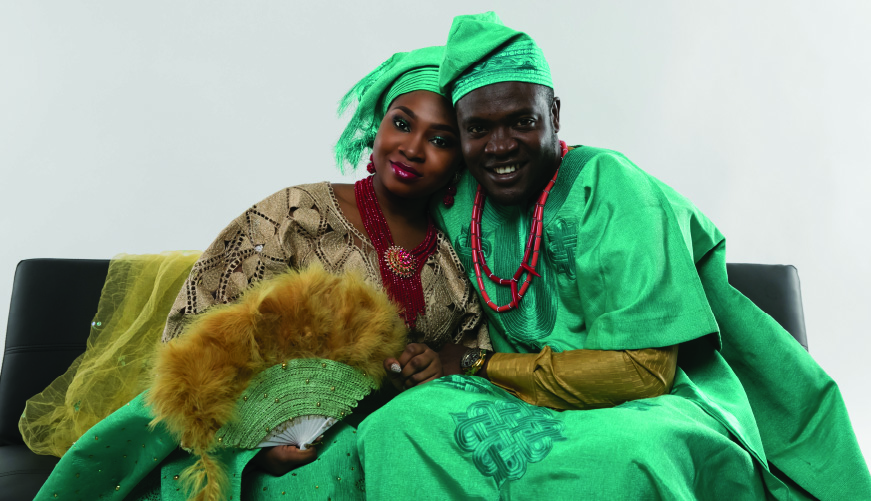 Marriage in Igboland is mainly a family engagement, and the family is called Umunna (kindred). The Umunna conducts the administration of the marriage rites, which includes negotiations with the groom’s family on the dowry to be paid for the bride. There is no common name for the dowry in Igboland. In some areas of Igboland, it is called Ibu ego, and in others, it is called Ime ego.

Iku-Aka/Iju-Ase/Ikobe-Apka (knocking on the door)

Traditionally, the groom’s family researches the bride’s family history and background to ensure no hereditary illness is associated with her family. This practice is usually an undercover activity, and once they confirm that there is nothing to be concerned about, they visit the bride’s family.

The family of the groom does the knocking.  After being welcomed by the bride’s family, which is usually done with the serving of kola nuts, they reciprocate the gesture by offering some kola nuts. In Igboland, the kola nut is an integral part of the marriage rites, and it is used to start the ceremony.   Kola nuts are also used at different intervals of the ceremony.

After the exchanges of kola nuts by the two families, the groom’s family  tells the bride’s family  the reason for their visit. The Igbo language is rich in proverbs, which are highly displayed during the marriage ceremony. While introducing their mission, the spokesman does not directly mention their assignment; instead, he uses symbolic words to refer to the bride-to-be. He will say something like this, “our son told us that he has been seeing a ripe palm fruit in this quarter, and we have traced that fruit to this house, so we have come to confirm that our finding is correct.” The bride’s family spokesman will respond, “there are many ripe palm fruits in this place, so which particular ripe palm fruit are you asking for?”

These exchanges go on for a while before they formally state their real mission. The girl’s name is then mentioned, and she is called in to confirm whether or not she knows the visitors.  Ifshe knows them, she consents to marriage negotiations,   and the process will continue. This initial statement of their mission is called Iku-aka, which is knocking on the door.

Ihe-umunna (the things for the extended family)

After the Iku-aka, a list of the requirements for the dowry payment is given to those from the groom’s family who came for the Iku-aka. This list is usually a comprehensive list of requirements to be brought on their next visit when the marriage ceremony is finalized. The list varies in different parts of Igboland. The things are presented, and the bride’s family inspects them and confirms that they are consistent with the original list. Should there be any discrepancies, they are warmly settled.

Ime ego or Ibu-Ego is the dowry stage. The bride price is named in this ceremony stage, which is usually negotiated. When they arrive at a compromise, the money is given to the bride’s father. Usually the bride’s father does not take all of the money given to him as the bride price; he takes some of it and returns the rest to the groom with these words, “What I want from you is to take care of my daughter.”

Next is the Ego-Nne, translated as “the mother’s money.” This money is an honor token given to the bride’s mother for her labors in raising the bride.

Igba-Nkwu (carrying of the wine)

Igba-Nkwu is the final consummation of the marriage rites. In all the processes mentioned above, only a few representatives of both families are present, usually in the living room of the bride’s  home.

The Last stage of the rites is done in public/

Here all the guests are present to witness the formalization of the marriage. As is customary in Igboland, this stage of the marriage rites begins with breaking the kola nuts and prayer for the groom and his bride. The seating arrangement is designed to have the two families sitting in different places designated for them.

The bride is given a cup, usually a native cup, of palm wine to give to the groom, seated somewhere in the crowd; she finds him and gives the wine to him. The bride and groom then  go to the bride’s parents, who  pray for them. Next, the couple  goes over to the groom’s parents, who receive the bride, and they too pray and bless the couple.

What follows are the celebrations, dancing, eating, and drinking.

When the ceremonies are over, the bride is escorted to her husband’s house by some married women from the bride’s family. In some Igbo customs, the bride is first brought to the groom’s family  home; usually, this takes place at night, and the groom’s mother receives the bride by washing her feet. This is a gesture of acceptance, and it is taken very seriously by the bride’s family. In other Igbo communities, the groom’s mother gives what is called Nzu (native chalk) to the bride to indicate that she has received her into her family with an open heart.

Christianity has had a significant influence on the way of life of the Igbo people. However, their cultural heritage is still a substantial factor in their lifestyles, seen in how they marry. Most Igbo couples, when getting married, even if they want to have a church wedding, always begin the marriage process by the traditional wine-carrying rites explained above. It is after this that they then proceed to do the church wedding.

Like many Igbo customs, there is no standard practice regarding the matter of divorce; however, when the need for divorce arises, the wife’s parents take the dowry back to the husband’s kindred. This action marks the severing of every marital obligation of the wife to the husband. For example, in the event of the husband’s death, the widow will not be required to perform any of the customary rites for the wife to serve. However, before a marriage degenerates to the point of divorce in most Igbo societies, the elders of the two families make several efforts to resolve the problem. Only when their efforts fail does the rite of severing the marriage occur.

The role of women in Igboland

The woman’s traditional role in Igboland is to care for her husband and children; every other  responsibility that the woman assumes stems from this role. Traditionally, the Igbo girl is raised  to care for her husband and children. Igbo women are known for their hard work, and they are usually significant support to their husbands either on the farm or in trading ventures. In different Igbo societies, the farming engagements of the women vary from rice planting to cassava farming. The traditional palm oil industry in Igboland is mainly in the care of women. In a nutshell, the Igbo woman is a very visible and vital force in the economies of most Igbo communities.

Healthcare in ancestral and modern Igboland

In Igboland, some traditional herbalists are thought to have inherited the gift of knowing the efficacy of herbs from their ancestors, while others have learned it as a trade. They used herbs and roots as the principal means of treating their patients. These are the traditional healthcare providers in ancestral Igboland; however, with the coming of western civilization, there are hospitals manned by qualified medical doctors in virtually every community in Igboland.