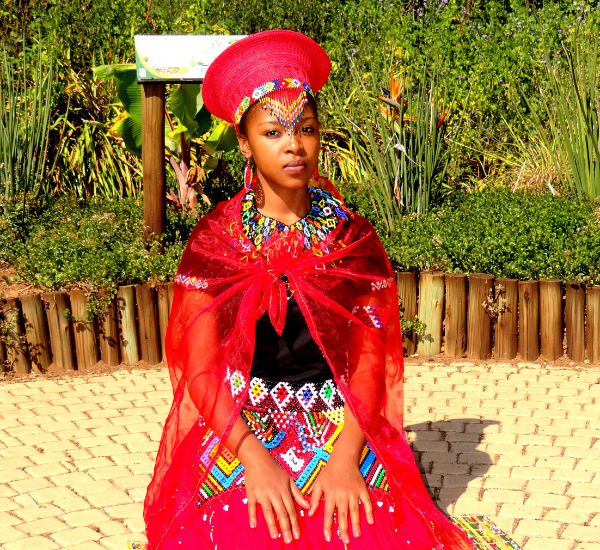 The Zulu people are very warm and amicable. In many African cultures, the term “ubuntu” plays a vital role in describing having empathy, knowing that you can’t live your life alone as a person. To make progress, one needs a helping hand from fellow community members. If you help a person today, that same person may reciprocate tomorrow. Ubuntu is, therefore, “humanity and togetherness.”

Each homestead instills respect and good manners to their children at a tender age.

GREETING (UKUBINGELELA)
A greeting can be seen as trivial, but it is one of the most vital things in African culture. It shows courtesy, goodwill, and respect and gives the person being greeted good impressions of the greeter. When you greet someone, your greeting must be accompanied by a smile, making it easier for the other person to initiate a conversation. Out of that conversation, friendship or relationship can emerge.

A young person is expected to greet the elders by saying, “Sawubona” (singular) and “Sanibonani” (plural). It is a basic greeting typically used between friends of the same age. Greeting an older person differs. One is expected to say, “Sawubona mama/ Sawubona baba,” or “Sawubona mkhulu” as a sign of respect. When greeting an elderly person, “Sawubona mama/baba/mkhulu” is insufficient. One must ask about the well-being of the person they greet as a sign of empathy. One can ask,

“Ingabakuyaphikela mama/baba? (Meaning, hope you are well). And the person being asked will give their response telling a long story (like

(I am okay even though I was sick with flu, but I am now feeling better; as you can see, I am standing and walking, etc.)

When one visits someone’s house, first of all, they are expected to greet the people they find inside the house and wait to be offered a seat. They are then expected to inquire about their well-being and state the reason for their visit.

The traditional way of greeting is by handshaking using both hands. Sometimes as a sign of respect, one would greet by clapping the hands and bending the knees slightly as if one wants to kneel. The latter is mainly done by married women when greeting their in-laws.

Should a young person meet an older person on the street, the young person is expected to stop and greet, not vice versa. If the young person passes without greeting, that will bring a disgrace and shame to their parents, as this is attributed to a bad upbringing.

GREETING AN ELDERLY PERSON
Greeting in the African culture is seen as a sign of humanity. It will be disrespectful to pass someone without greeting, especially older people. Greeting someone older than you or an older person differs from greeting their peers. When greeting an older person, your greeting must be followed by a title, e.g., sawubona mama (mother) or baba (father) or mkhulu (grandfather), etc. the same applies when you are greeting your older siblings bhuti or sisi (brother or sister).

SAYING GOODBYE
When one visits another person(s) place, when it is time to leave, they are not expected to simply stand up and say, “I am going (leaving) now.” They are expected to politely announce their departure, depending on the number of people he or they come to visit. If one has visited one person, they can bid farewell by saying “Usale kahle” (meaning goodbye). If they visited more than one person, they would say, “Nisale kahle,” which still means goodbye. The person remaining will respond by saying, “Uhambe” (to one person) or “Nihambe” (to more than one person), meaning “go well.”

TABLE MANNERS
Traditionally, they do not follow Western dining etiquette when dining. Most of the food is enjoyed with the whole family gathered in one place. During the winter months or cold days, everyone would gather around a fire sitting and chatting. Before meals are served, a dish filled with water is passed around so that everyone can wash their hands, starting from the oldest to the youngest. During a meal, people may talk or laugh or tell jokes as long they do so without food in their mouths.

There is no formality of when to leave the eating place. When you are done eating, you may ask to be excused and leave.

RESPECTING
It is seen as a mother’s responsibility to teach her children respect from a tender age. When a child is disrespectful, their mother (not the father) is the one to be blamed. It is common to hear a father saying to the mother, “You see, your children are disrespectful because you haven’t taught them how to behave.”

It is a rule that you must respect a person older than you. You should address that person using their title, not their name; for instance, when calling your elder sister or brother, you should say “sisi” or “bhuti.”

When an older person sends a younger person to run an errand, it is considered disrespectful to refuse. It is disrespectful to look at an older person directly in their eyes while talking. Respect is not only in communication but also in how people dress. As a girl or boy, you can wear almost any kind of clothing. Dressing changes according to specific stages of life, especially for females. When a girl comes out of age, goes through puberty, and has her first period, her parents (the older women) sit with her and explain certain things such as conducting herself and how to dress appropriately. This counseling continues until the young woman gets married. The way of dressing is called ukuhlonipha (respect).

The Zulu people follow ukuhlonipha in several ways. When one becomes umakoti (new bride), she cannot serve her husband or father and uncles of her husband’s family food directly. The way you talk or answer to the people around you says a lot about your upbringing. One is expected to lower her voice when talking to her elders.

Respect:
Excessive eye contact is considered provocative and is avoided, particularly between women and men.

When handing over or giving someone something, for example, when dining, if someone asks for salt, passing it with your right hand will be appropriate instead of using your left hand.