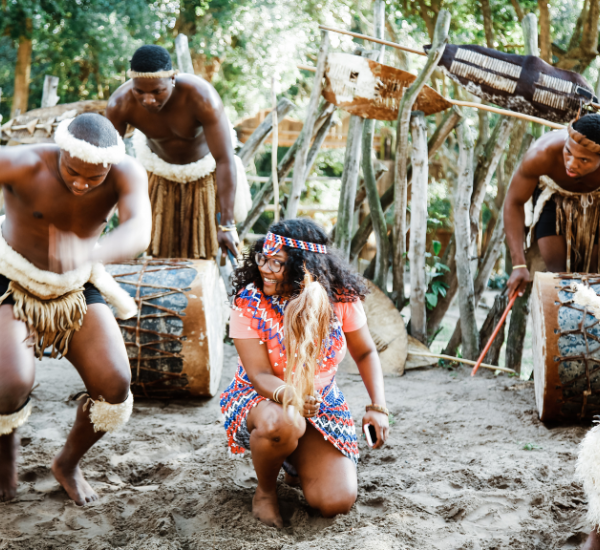 MUSIC
Music is an integral part of many traditional African societies. Music facilitates different teachings about one’s cultural history, spiritual experiences, and recitations. It also and promoting social values and gives an insight on how certain special events are celebrated during happy (weddings) and sad (funerals) moments. Music brings a sense of calmness and helps to improve one’s mentally and emotionally.

DANCE
Dance is a form of expressing cultural, tribal loyalty and power. Zulus also perform their traditional dance during ceremonies and to communicate with their ancestors. it provides a sense of enjoyment, happiness, and social affirmation. To those who are not familiar with the culture, the dance serves as a way that helps other people to have respect, knowledge and gives them a depth insight on the importance to the Zulu traditions and norms. Each dance tells a story or is performed for a certain reason or event accompanied by singing and chanting. It serves as a way of recounting history, conveying emotions, celebrating rites of passage, and helping with the unification of the communities.

Each Zulu dance is performed using drums that form an essential part of their celebration the most type of drum used during their dance is ingungu ( made out of wood or metal) and covered in animal leather skin and strike by hand or stick to make a loud rhythmic sound).

During this event maidens are also taught by senior females on how to behave and be proud of their virginity and respect their temples (bodies). It is during this ceremony that any suitor may show interest on any of the maidens with the intention of making her his wife may approach that maiden. It is an This event usually lasts between four to five days. Zulu men also participate in this part of the ceremony, singing and mock fighting. The Umhlanga also gives an opportunity by the older females (amaqhikiza) to educate the young maidens (amatshitshi) on how to behave in married life. Young maidens are encouraged not to argue or respond immediately when approached by any suitor, but to wish him well on his journey back. This event encourages and promotes purity among the virgin girls and respect for women. The Zulu Reed Dance ceremony is the key element of keeping young girls’ virgins until they are ready to get married.

ARTS
Zulu people are very creative, and this is seen in their art and craftwork – primarily beadwork, weaving, and pottery.

Beads
Beadmaking is mainly women’s work.  Most women would gather in small groups after they are done with doing their house chores and start making different kinds of beads. Some of these women will sell the beadwork to the visitors during special events.

Most of the beads are used by individuals to decorate and adorn themselves. Bright colours are used and are worked into wonderful geometric patterns. Beads not only decorate, but they also convey messages without being direct.  Different colour beads have different meanings. Ucu (ulu) beads were historically used as a language between men and women, to express their love, feelings, relationship status, for instance, when a woman has been proposed by a man, she may not accept his proposal at the same time but will later send him a bead as a way of accepting the proposal.

Beads serve an important role in the Zulu culture like in many African cultures. They form part of the traditional attire for a certain event or ceremony.

Pottery
Pottery is made from dark clay from the riverside. Several clay pots are made by the women with patterns scratched into them and dried around a hot fire.  They are often used for rites and rituals such as weddings, births, marriages, and burials often symbolizing hospitality and communality. Some of the pots are used as water reservoirs. In all the traditional ceremonies, the umqombothi (traditional beer) is served in the Ukhamba vessel as a way of respect and honouring the ancestors by kneeling when drinking it.

Weaving
Different forms of items, e.g., baskets, mats, brooms, hats were woven from different natural materials, they are made from dried grass, thin rushes, or lengths of old telephone wire. Baskets are used for storing, transporting and as drinking vessels as well as during many zulu ceremonies. They are also woven into wonderful geometric shapes with different colours achieved by dying the grass with berries, roots and flowers. The tradition of weaving has been passed down from generations.