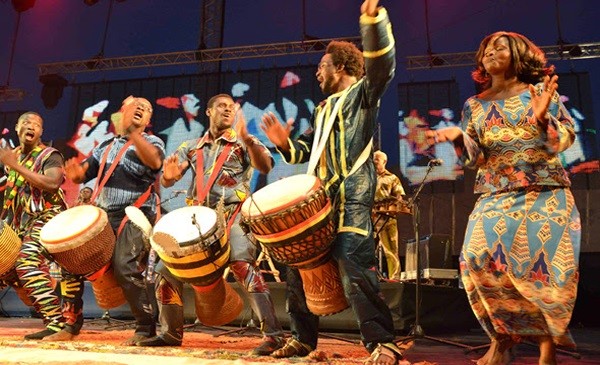 The kingdom of Buganda is so rich in music that they have got their anthem referred to as the Buganda anthem. The Buganda anthem is called ‘Ekitiibwa kya Buganda’ (Buganda’s Pride). It was composed by Reverend Polycarp Kakooza in 1939. It would be unfair if we began discussing the topic of music without presenting the Buganda anthem. Some important functions amongst the Baganda are not started and ended unless this anthem has been sung.

Music has various uses in Buganda. It is not just voice, and it is embedded with several instruments that enhance the sound and make it pretty pleasing to hear yet original because it’s all crude and Ugandan. When it comes to music, there are mainly two types of music in Buganda:kadongo kamu and traditional folk songs. Present-day musicians have developed more music in Luganda, but the style is somewhat westernized.

The word “kadongo kamu” in Luganda means one small guitar. It is not always the case that music is made with just one guitar because other instruments are often included. However, the authentic style of this music genre depends only on one guitar for instrumentation, hence the name “one small guitar.” This type of music rose out of traditional Kiganda music. “Bakisimba” is a drumming style and dance Kiganda traditional music. It is well known for the drumming and dancing styles in traditional music in Buganda and throughout Uganda. The drum used in this music genre is a heavy bass drum that creates a sound that can be recreated with a bass guitar. The first musicians to practice this type of music were inspired by this drumming pattern, so they used guitars as an easier way of recreating the traditional sound without using a drum. They traveled from place to place, playing the music and delivering interesting messages to their audiences, who were often familiar with the sound they were hearing. In most cases, edutainment kept their audiences glued and listening.

The singer would often play the guitar himself while dancing; therefore, many kadongo Kamu artists were very good at playing the guitar. The song structure of ‘Kadongo Kamu’ is more of a storytelling structure since it gets its roots from traditional folk songs. There are no repeated choruses though they are melodic like other genres. Some music is meant for listening, and audiences sometimes dance to it. So most singers are usually very charming, creative, and witty because they can deliver exciting and thought-provoking music in the same song.

The first well-known artist of this type of music was Fred Masagazi in the 1960s through the ’90s to the early ’90s. It would be unfair to talk about this music and not mention the late Elly Wamala, who contributed immensely to making the urban Kadongo Kamu style. It’s no wonder that the modern music artists in Buganda are reproducing his songs to pay tribute to him. His music stood out and contributed a lot to this particular genre. Other artists include Christopher Sebadduka, who popularized the genre and is considered the godfather of kadongo kamu music in Buganda and Uganda. The genre was further influenced by musicians such as Peterson Mutebi, Dan Mugula, Sebadduka Toffa, Fred Ssonko, Livingstone Kasozi, Fred Masagazi, Baligidde, Abuman Mukungu, Gerald Mukasa, Sauda Nakakaawa, Matia Luyima, Fred Ssebatta, Herman Basudde, and Paulo Kafeero and so on. To date, this music is still very influential in Uganda as a whole country.

Traditional folk music is pure crude ‘Kiganda’ music. When we talk about Buganda music, most people familiar with Buganda might think of traditional folk songs. These songs comprise a big part of the music in Buganda because they are considered the root of music in the kingdom. This traditional music is heavily based on different types of drums and percussion. Games in Buganda sometimes include these folk songs to prepare children, young men, or girls to participate in all areas of life. Further, the Baganda use traditional folk music to praise and worship their gods, show their authority, and celebrate life. They also use it to celebrate achievements such as good harvests, work achievements, births of children, educate the population to earn a living (employment), for recreation, and as a means to disseminate cultural values from generation to generation.

In Buganda, dancing is common almost in every function that requires celebration. The Baganda people are merrymakers and love to celebrate whenever they have reason to. Perhaps this explains why it’s so common to hear drums and loud music playing whenever they have a function. They have such a strong attachment to their traditional music and dance that many live off the talent of dancing traditional Kiganda dances.

The Baganda dance is dominated by three dances, ‘bakusimba, muwogola, and nankasa,’ and their daily activities inspire them.

Nankasa, Baakisiimba, Muwogola are social gathering dances of the Baganda people that originated from the palace of the King of Buganda,

There was a Buganda king (Kabaka) who immensely enjoyed the local beer, ‘tonto omwenge.’ This local brew, ‘Tonto,’ is made from banana plants. This name is taken from the Lugandan word ‘tontomera,’ which means do not knock me. So one day, the king drank too much of the local brew, which made him so ‘excited.’ In Buganda, it is taboo to say that the king is drunk, and one can only say that the king is happy or excited. When the king got ‘happy,’ he started praising the people who had made the beer, saying “abaakisiimba,” which translates to “those who planted the bananas “bebaakiwoomya” are the ones who made it delicious. The musicians who were present then made an ‘abaakisiimba’ rhythm that was imitating the words of the king, who in return started to move and dance in excitement. As he moved, the musicians mimicked the king’s words; the women imitated the king’s movements, which eventually became a dance still being performed throughout Buganda. This dance has three major movements: ‘Nankasa’ followed by ‘Baakisiimba’ and ‘Muwogola.’ ‘Baakisimba’ is the court dance where the ‘engoma’ (drum set) is the most important musical instrument used.

Other Baganda dances originated from different clans and were danced during various economic, social, political, and educational activities depending on the audience for which they were made. These include:

Amaggunju – Amaggunju is a royal dance of the Baganda people, and it is also a folk dance that developed in the king’s palace. This dance’s development dates back to 1555 when a Buganda king called King ‘Mulondo’ died without leaving behind any heirs. However, he left behind many pregnant wives. Therefore, the medicine men and traditional witch doctors urgently searched for a wife pregnant with a boy since it is taboo for the kingdom to be ruled by a woman. So one of the wives’ Namulondo, who was expecting a boy, sat on the throne, and the people understood that it was her unborn son ruling, not her. Finally, when the prince was born, he ruled the throne as he lay on it. The Baganda believe that kings are not supposed to cry, and doing so would bring curses and bad luck to the kingdom. Therefore, the uncles and aunts of the baby prince put ankle bells on their legs and danced, making a sound that made the baby happy and kept it from crying hence the ‘amaggunju’ dance. Previously, this dance was only performed by people of the ‘Obutiko’ (Mushroom) clan and was only performed in the palace, but these days many ordinary people perform it.

Mbaga – A wedding dance of the Baganda people. This dance is performed by girls who have reached the age of eighteen to prepare them as wives. They are given information about the duties and tasks to perform in their future marriages, that’s to say, how to serve their future husband, give birth to children and raise them, manage housework, do the laundry, and work in the fields. These tasks are shown in the dance. Two drums only accompany this dance, the ’embuutu’ (big drum) and the ‘engalabi’ (long drum), which represent the male and the female form. The dance is performed during the wedding ceremony. This ‘Mbaga’ dance is performed for freshly and already married couples, mostly for edutainment purposes. The dance is known for its elaborative and sensual gestures to communicate sex education. Two drums, the ‘engalabi’ and ’embuutu,’ are used to dictate the gestures and movements of this dance.

It should be noted that the kadongo (a commonly used drum) was more recently introduced to Baganda in the early 20th century. For this reason, it is not part of traditional court music.

The people of Buganda have promoted the use of the drum in their music. They are deeply connected to the drums that some people think that drums originated from Buganda. This relationship is so profound to the extent that they even call themselves the children of the drum (omwaana we ngoma). No wonder the name of the drum set has its origin in the ‘Luganda’ language. The name of this musical instrument dates back to when the Baganda people were collecting white ants. They used to dig a hole near the ants’ colony, hence collecting them. If the ants left that hole, a sound near the spot they were searching was formed like that of a ‘ngoma,’ hence the name ‘ngoma’ coming forth.

This activity was done while singing songs such that some Baganda still sing these songs while gathering ants to date. They also play drums (ngoma).

There are many types of drums in Buganda, and these include:

Empunyi: These are rhythm drums that produce the central beat of the whole sound. The ’empunyi’ is made of wood, covered with cow skin pegged on the ends. Typically, these are played in sets of seven drums; each drum usually has its own “voice” and function. Another popular set is made with four drums. Each of these drums has to be identified individually; hence each has a specific name.

Bakisimba: This is the largest drum, making a loud bass sound.

Empuunya: This one is smaller and produces a higher-pitched bass sound.

Nankasa This is a small drum played with sticks and produces a high-pitched sound that controls all dance motifs.

Engalabi: This particular drum looks like the original ‘ngoma.’ It is taller and more cylindrical than the rest of the drums in this set. It has skin on only one side. All other drums are covered with cow skin on the top and bottom using an intricate lacing system, whereas the ‘engalabi’ has a lizard/snake skinhead attached with small wooden pegs. This drum makes the highest-pitched sound in the ensemble. The ‘engalabi’ (long drum) is the male drum (engoma ensajja). This traditional drum’s head is made of a reptile’s hide and is attached to a wooden resonant cavity (a slim lower part), an allusion to the male phallus. It is a single-walled drum. Wooden tiny rods are pressed into the skin, with the wooden resonant body being decorated. Only the hands are allowed to be used for playing this drum.

On the other hand, the’ embuutu’ is considered the so-called ‘engoma enkazi’ (female drum). It is a huge drum that produces many rhythms and determines the melody for everyday dancing. The holy, double-headed drum provided with double membranes is made of pinewood and decorated using cowries and pearls. The secular ’embuutu’ is decorated by lacing up the skin hide, the non-resounding skin, and two clinging pearls as ‘abalongo’ (twins) are arranged before the head is sealed using the skin hides.