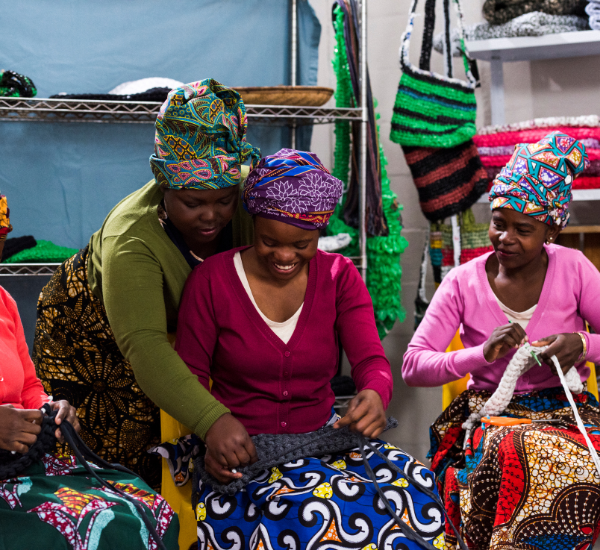 Both male and female children are expected to kneel while greeting their elders. Baganda usually say “Tewesimba ku bakaddebo” meaning don’t stand before your elders. It is considered deeply rude and disrespectful to stand while greeting an elder, and this kind of bad behavior is blamed on the parents. It is depicted as a failure for parents to raise the child with good manners.

Men greet each other while standing and usually exchange a firm handshake. They don’t have to kneel, but some men kneel while greeting their fathers, mothers, and grandfathers.

A woman sits down while greeting other people, and if the one being greeted is older, they have to kneel.

Women are expected to cover their lower bodies completely. Transparent and very tight clothing is considered inappropriate. More so, they are expected to wear a ‘gomesi’ while visiting their in-laws. A ‘gomesi’ is regarded as the most appropriate dress for women while attending most public traditional ceremonies.

Regardless of the weather, men are expected to wear trousers (not shorts). Shorts are viewed more as children’s clothing.

While in the presence of the Buganda king, women are expected to wear a ‘gomesi’ or cloth that is covering their body. It is a taboo ‘okukunamila kabaka,’ meaning one is not supposed to wear revealing clothes in the king’s presence.

Men are supposed to wear a ‘kanzu’ while officially visiting their in-laws. It is taboo for a man to formally visit his in-laws in clothing other than a ‘kanzu.’ They are also expected to do the same with the kabaka (king) of Buganda.

*************Baganda women are not supposed to sit cross legged as this is considered as ‘okuyuguliza akabina’ oba okukunama.’

Men are not supposed to sit with legs very wide opened and their hands spread over the chair. All this is seen as poor mannerism.

Women are supposed to keep their eyes lowered and their voices down while talking to elders.

‘Omukazi omuganda taleekana, taboggokka.’ Meaning that a Muganda woman does not shout, speak on top of her voice, and use a barking tone.

‘Omukazi omuganda tawemula.’ Meaning that a Muganda woman does not use dirty words while speaking. The same also applies to men.

Women and men are supposed to communicate with their elders while seated down in the same room as they are. It is considered rude and impolite to “throw words” at elders when they are far away. One is supposed to move over to where the elder is and say whatever they want to communicate calmly and in a low voice.

Children and women are encouraged to go down on their knees while talking to their parents and elders if they are close to them.

Elders and parents usually speak in parables or indirectly while addressing issues that are considered sensitive. ‘Abaganda tebamala gakubawo bigambo.’

When someone has an issue, concern, dispute, or problem with another person, they are expected to take that person aside and resolve whatever issue they have secretly. Picking up fights and starting conflicts in public is not accepted in Buganda and doing so is one of the greatest displays of poor manners. Doing so leads to a lack of respect from the community or society that learns about such an incident.

Parents keep space between them and their sons or daughters-in-law to avoid getting sick of ‘obuko.’ It is also done to prevent sexual temptations between the two parties. For this very reason, daughters-in-law never walk through the middle of the compound while their fathers-in-law are watching, and they always have to wear a ‘gomesi’ while visiting.

Men are supposed to keep space between themselves and women when talking with no touching. On the other hand, if they are talking to fellow men, it is okay to shake hands or put ones hand on the shoulder of another man.

Daughters are still advised to keep some reasonable distance between themselves and their fathers. Girls who are no longer babies are not expected to be sitting on their father’s laps, and touching should be minimal. They are also advised to be fully dressed and covered while around their fathers.

When a girl starts experiencing her menstruation periods, they are expected to start behaving like a woman and keep a distance from men and boys. Parents start prohibiting girls who have reached this age from sitting on their bed, climbing trees, or playing games that women don’t play. They are also expected to be extremely clean and display maximum body hygiene. It is also about time they send them to their paternal aunts for grooming.

People are not expected to talk with a mouth full of food or chew with open mouths. Children are expected to ask their elders politely when they need more food while dining. It is considered rude to get up and attend to other issues while eating or while others are still dining. Thanking cooks after eating is a must, and failure to do so is seen as a total lack of manners and ingratitude.

If food has been cooked and is still in a pan or pot, nobody is expected to smell it or taste it with a fork or spoon. One is supposed to wait for the food to be served on their plate.

If eating with bare fingers, one should try as much as possible to avoid getting their fingers full of food and putting too much food in their mouths. If one does the latter, then they are viewed as gluttons.

While dining with others, it is advisable to avoid looking into other people’s plates and commenting about their food.

Sex before marriage is taboo, and so is pregnancy. Singles are not expected to be sexually intimate or be in relationships with those of the opposite sex. Any relationship is monitored and can only be accepted if it leads to marriage, and both parents /families of those in relationships should know about it.

Public display of affection should be restricted to a hug and holding of hands. Anything beyond this is considered immoral, especially among children and elders. Sexual acts are kept away from children, and so is any sexual information.

Getting drunk, especially for women, is considered immoral and disgusting.

Nobody is expected to steal.

One’s underwear is personal and should be kept private, and so are their private parts. Women should sit with their legs tightly closed. If a woman gets problems in her marriage, she is expected to resolve the issues discreetly.

One is supposed to wash their hands after using the bathroom and before touching food. Chewing while talking to people is also considered rude.

Girls, including those working and having graduated from school, are expected to stay at their parents’ home until they get married. It is a shame for a son-in-law to visit his in-laws without bringing them a gift.

Neighbourly Practices in the Buganda Culture