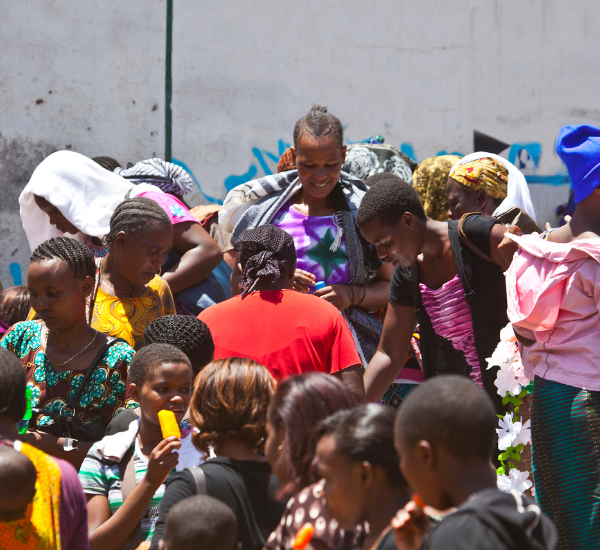 In Buganda, neighbors generally treat each other as family. This neighborliness is portrayed in issues to do with handling children and functions. The family relationship between neighbors is also stronger in rural areas than in urban areas.

Children in Buganda are expected to treat the elders in the neighborhood with maximum respect. This respect entails greeting the elders while kneeling and talking to them in the same way one would address their parents at home. The elders of different families in Buganda are expected to treat their neighbor’s children the same way they would treat their own. There is a saying in Buganda that says it takes a village to raise a child; therefore, raising a child in Buganda is a communal responsibility. Children in Buganda refer to their elderly male neighbors as fathers and the female ones as mothers.

Disrespect and bad behavior from children to neighbors cannot be tolerated. Therefore, it is not surprising to find a neighbor disciplining a child from a neighboring family. Children are expected to greet neighbors whenever they meet them and should do so while kneeling.

Children are free to play in the compounds of their neighbors, and no one will be insulted. If one acts rude and angry towards these children, they are ridiculed by society and seen as ill-mannered.

It is considered rude to deny giving fire to a neighbor since Buganda believe that this is something one might need from the very neighbor they declined fire the day before.

Whenever neighbors slaughter a cow or goat, they are expected to share the meat with their neighbors. The same also applies to situations where one gets large harvests. Neighbors are treated as extended family members.

It is also considered rude to deny giving drinking water to a neighbor if they need it. Neighbors are expected to respond quickly when they hear any cry for help from surrounding homes.

When a neighbor gives birth to a new baby his/, her neighbors are expected to go over with gifts and welcome the new baby.

Neighbors are expected to grieve and mourn the death of another neighbor as if they were mourning their own. The same applies to all the celebrations that go on in the neighborhood. Failure to attend these functions is a sign of extremely bad behavior with negative consequences. For example, suppose a neighbor is labeled anti-social because they exclude themselves from social activities and functions in the neighborhood. In that case, nobody helps them out or even bothers to attend funerals that may befall them. Additionally, people in the neighborhood can refuse to attend their weddings and celebrations.

When it comes to both sorrowful or merrymaking functions, neighbors organize the functions such as cooking, cleaning, and putting up tents. They also contribute financially. This is referred to as “okola emirimu.”

Neighbors are expected to be at their best behavior, especially when dealing with the elderly. Neighbors with extremely bad alarming behavior can be ex-commutated. So one needs to watch their behavior, including their tongue because rudeness and abusive language are not taken lightly.

Being kind and humble are virtues neighbors should exhibit towards each other. Failure to do so will tarnish one’s image before their neighbors.

One should try to keep their livestock off their neighbors’ land because if they destroy their crops, this can lead to severe consequences, and the authorities get involved.

Generally, neighbors are hospitable and peaceful with each other, but issues to do with land disputes can permanently destroy relationships between neighboring families. Therefore, neighbors are advised to refrain from practices of land grabbing and should only claim ownership over land that is rightfully theirs.