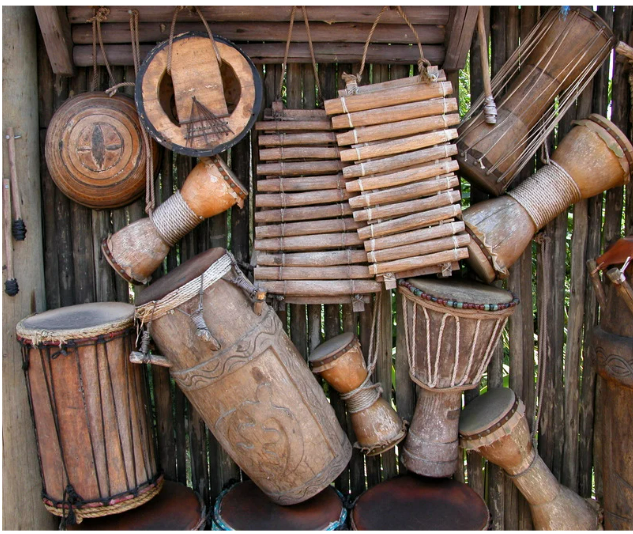 When one mentions Shona music on an international stage, names like Oliver Mtukudzi, Leonard Dembo, and NduxMalaks come to mind precisely because of their massive impact on the music scene over the years. However, it will be wrong to assess Shona Music, dance, and art based on the above mentioned mostly because the Shona culture is vibrant in music genres, dance types, and art forms.

Musical Instruments
The most common musical instruments used by the Shona include the following:

Mbira
It consists of staggered metal tines attached to a wooden board. It is played by placing the instrument in the hands then plucking the tines with the thumbs. Sometimes, the right forefinger and the left forefinger are used. It is typically housed in a round in shaped covering and has bottle caps, shells, or other objects strung around its perimeter. These objects vibrate with the mbira, creating a buzzing sound.

Hosho (rattle)
The hosho consists of a pair of maranka (mapudzi) gourds with seeds, typically hota (Canna indica) seeds inside them. A minor variation is made from a wild orange called a damba, tied together with sticks and filled with hota seeds or pebbles. This instrument is also used as percussion in modern-day bands. The late Oliver Mtukudzi is one of the recent artists to have incorporated the hosho into contemporary Shona Jazz music.

Ngoma (drum)
The Ngoma is a musical instrument made of wood covered with cow skin pegged on the edges. The Ngoma come in a wide range of shapes and sizes and are just as varied as the genres they are used for. Bigger drums (today known as the congas) are usually played using sticks, while the smaller ones are played using open palms. In most cases, the size of the stick is, however, proportionate to the drum’s size. In traditional Shona music, the big drums usually maintain a steady, continuous rhythm, while the smaller ones are played creatively to “fill the gaps” and play the role of percussions; the latter must also go in synchrony with the mbira and hosho.

Magavhu (leg rattle)
Leg rattles are very creative because they produce sound or music that reflects and represents the movement and rhythm of the dancers’ feet.

The human voice
The human voice is not listed here by mistake; it is a form of musical instrument in Shona traditional music because it involves actual singing and ululations and other noises during traditional song and dance.

Drums
Drums are always associated with dance and can be used for various dances.

Some traditional Zimbabwean instruments are facing the danger of extinction, such as chizambi, chipendani, tsuri, mukwatiwenyere.

There are diverse repertoires of Shona music, including

Zimbabwean traditional dances place importance on rhythm. Like most African dances, Zimbabwean dances use polyrhythm, which is usually matched by body articulation.

Dances of the Shona
Jerusarema dance-It is practiced by the Zezuru Shona-people living in the Murehwa and Uzumba-Maramba-Pfungwe (UMP) districts in eastern Zimbabwe. They are popular dances among the Shona people who constitute about 76% of the Zimbabwean population.

Mbende, is one of the most celebrated dances of the Shona people. It is practiced by the Zezuru Shona-people living in the Murehwa and Uzumba-Maramba-Pfungwe (UMP) districts in eastern Zimbabwe.

Shona Sculptures
The Shona people of Zimbabwe have been hand sculpting stone into works of art for centuries. Shona sculptures and carvings are beautiful and elegant, contemporary, yet eternal. They come in elaborate shapes and all different sizes that complement any decor in a home, building, or well-manicured landscape. The most common themes portrayed represent the esteemed values in the Shona culture of family, love, life, and nature.

About Serpentine Stone
Zimbabwean sculptors most commonly use serpentine stone to carve their beautiful stone sculptures that have earned worldwide recognition.  Serpentine stone is found in Zimbabwe in various colors, from black and green to yellows, orange, grey, red, and sometimes even purple. The stones exhibit unique patterns that formed in the rock millions of years ago.

History of Shona Sculptures
The Shona started stone carving more than 2000 years ago, and stone carvings were probably common during the era of Great Zimbabwe. However, it wasn’t until the mid-1900s, when there was a rise in travel from southern Africa to other continents, that the art gained renown by art collectors around the world. The Shona are very religious and spiritual people who believe in ancestral spirits known as Vadzimu.  Many of them believe that their ancestors and families often visit them may perform various rituals to pay their respects to those ancestral spirits. Shona sculptures demonstrate and represent the unity between those two worlds, the physical and the spiritual. It is said that they would carve to express both personal and spiritual beliefs.

The talented Shona stone carvers firmly believe that every stone has a life-spirit, and their job is to release the spirit trapped in the stone. These sculptures have their own distinct style. Each one is original and completely hand-carved by an artist. They are not factory-made; therefore, each piece is unique and comes at a high price. The intricate beauty of the handiwork, the complex artistic expression, and the beauty of the serpentine stone have gained Shona sculptors great renown worldwide. Naturally, these sculpting skills have been adopted by other African countries, so Shona sculpture is often referred to as Zimbabwe stone sculpture to indicate origin and guarantee authenticity.