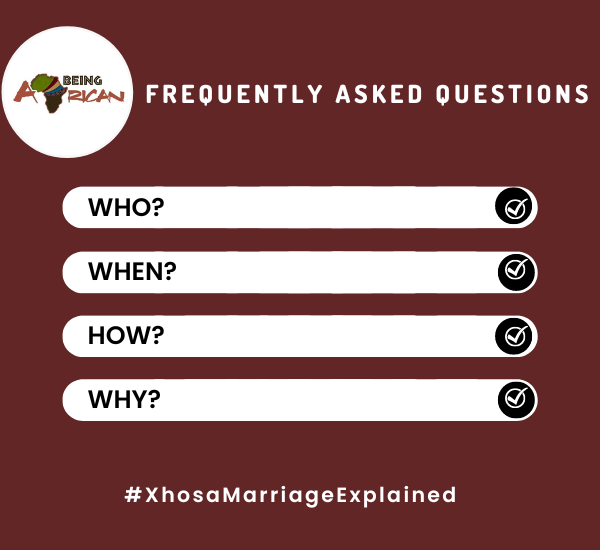 Who is considered to be umalume?

These are the qualities Umalume should possess:

Role of women (Mother and Oomalumekazi)

Who plays the role of Oomalumekazi ?

Ukuzeka – 4 ways marriage can be initiated

The man’s family will be penalized for this deed.

Ukuvuma is an acceptance letter written by the bride’s family in which they state their proposed date for the lobola negotiations. This is a response to the letter from the groom’s family.

Ilobola is the custom by which a bridegroom’s family pays cattle or cash to the bride’s family.

What are the typical stages of the lobola process?

○ Ubuso bentombi is a cow given to the bride’s family by the groom’s family to show gratitude for the bride.

○ Cow of shock: It is assumed that when the daughter tells her mother that someone wants to marry her – she (the mother) is overjoyed but in shock that her daughter has now reached such stage of becoming someone’s wife.

○ It is also a sign of appreciation and thanksgiving to the bride’s mother for giving birth and nurturing her daughter until she reaches the stage of marriage.

After all the above have been done, the marriage arrangements will commence as per below:

After all the above have been done, the marriage arrangements will commence as per below:

Cow from the groom’s side

Presenting the bride to the groom’s family and counselling.

What is the significance of spear throwing by the bride?

What happens if the spear falls flat on the ground?

What is the significance of inkubabulongwe (beetle dung)?

What does the bride wear for the ceremony?

5) How to address the older men in the family. …