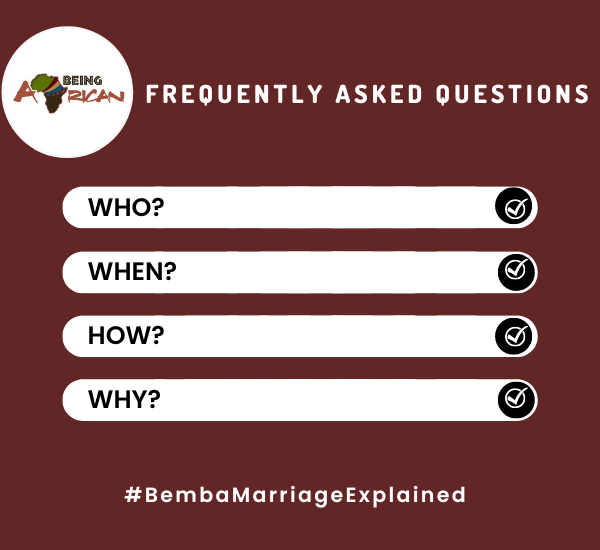 Who is Bashi Bukombe?

Who can take the role of Bashi Bukombe?

Qualities to look for Bashi Bukombe

Bana Senge -(Aunties from the Father’s side)

Who is Bana Senge?

What is bana senge’s role on the bride’s side of the family?

What is Bana Senges role on the groom’s side of the family?

What is the Imbale – Plate

What is the Imbale-plate used for?

The bride uncovers the plate (Imbale) to signify that she has accepted the marriage proposal.

Why is Impango necessary?

What is the money used for?

NB/ Bembas do not charge a high impango. They feel that if they charge a lot of money, it is  like they are selling their daughter and it loses its meaning as a token of appreciation.

In extreme cases where the husband mistreats their daughter, the parents of the girl usually pay back the impango and demand that their daughter be brought back to their home.

What happens if you do not pay the impango?

It should be noted that, if the impango is not finished, in case the wife dies, burial cannot  take place until the outstanding dowry is paid (THIS SHOULD BE EMPHASIZED)

What is Icilanga mulilo?

What is the Training Ceremony?

Mortar and Pestle – (in Bemba, it is called Ibende no Umwinshi)

Other forms of training

Amatebeto(Thanksgiving Ceremony for the husband)