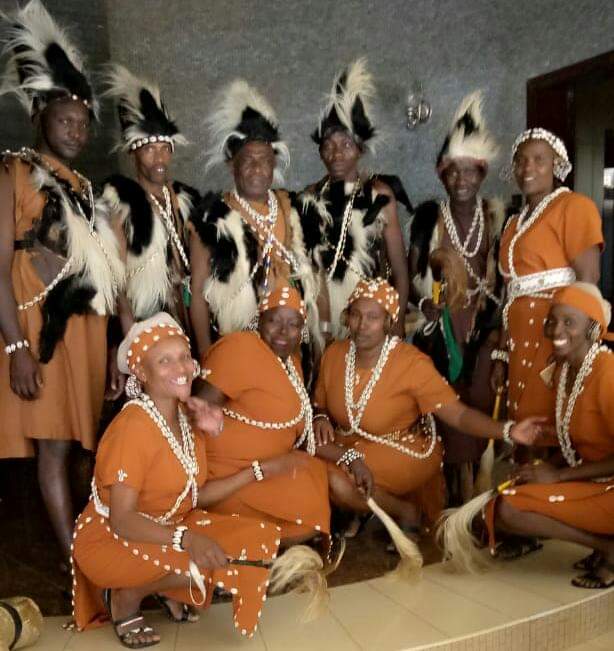 Dance
The Kikuyu are best known for the mwomboko dance, although this is borrowed from the Europeans. It resembles the fox trot and was introduced to them by soldiers who returned home from World War I. The mwomboko replaced the muthirigu, which the colonial government banned due to its social protest origins.

The dancers move in a file, accompanied by the karing’aring’a, a traditional instrument, and then count two steps, bend down and move back and forth. The Kikuyu dance during happy occasions. These include marriage, circumcision, harvesting, childbirth, and the second birth.

Circumcision Dances
Dances are performed before and after circumcision. Before circumcision, young boys and girls acquire the necessary costume and learn complex steps for a great dance on the eve of the ceremony. The dance is only held when there has been a good harvest, as a bad harvest is considered a punishment by Ngai. The initiates practice for several weeks before the big day to build stamina. They wear a rattle at the knee, a colobus monkey skin cape, and draw patterns on their legs, hands, and stomachs in white vegetable dye.

The mambura, the great dance, is held near a mugumo tree, which is sacred to the Kikuyu. Accompanied by their mothers blowing bamboo tubes, boys and girls dance together in the middle of the field. Boys dance by moving their necks back and forth and jumping up and down on one leg, while the girls bend into a half squat and move their hands back and forth while shaking their waists. The dance ends when it is time to bless the huts that the initiates would recover in after circumcision.

The ndorosi is performed by young men after circumcision. This is a dance by warriors showing their readiness for battle. The young men wear the full battle dress and carry weapons. They dance in perfect formation while the women cheer and throw leaves at their favorite dancers.

Harvest Dances
After a good maize harvest, dancers adorn themselves in maize sheaths and dance by making short jumps while ululating.

In the gichukia, the young women put their hands on the men’s shoulders while standing together around a fire circle. The young men circle their partners waists by holding their spears behind their backs. The dancers sway at the waist from side to side in perfect silence.

In the kuinenera they form a circle. The young men are outside, and the young women are on the inside, facing each other. The men’s hands rest on the girls’ hips, and the girls put theirs on the men’s shoulders. They then sway and jump vertically and laterally, rotating in the circle.

Marriage Dances.
The older women dance the getiro during the payment of the bride price. One woman sings while the rest join the chorus and shuffle their feet in a coordinated manner.

Modern Day Dance.
The Kikuyu have primarily abandoned their cultural dances. The mwomboko is performed by cultural dancers during national celebrations.

The mugithi is danced to Kikuyu contemporary music. Mugithi means train, and the dancers form a single file, holding each other from behind. The train then moves across the room, picking up more passengers.

Music
There are different songs for different age groups. Old women sing the gutuuha, urging the young to let the goats run about. The youth sing the uriigu, celebrating impending initiation. They also sing the irua after circumcision, celebrating their new role in the community. The kiriro is sung by newlywed women lamenting their separation from their families.

Kikuyu contemporary music is very popular. Older musicians like Joseph Kamaru use a lot of sayings and proverbs in their music and challenge the community’s morality. Younger musicians mostly sing about love and societal issues. The most popular are Samidoh, Jose Gatutura and Joyce wa mamaa. They no longer use proverbs and expressions in their music.

Horns(Coro)
The Kikuyu blow horns from the oryx and kudu. They also blow tubes from the bamboo tree.

Rattles. (Kigamba)
Rattles are made from iron, with iron bullets enclosed in a tube and then strapped above the knee. Young boys use a gourd filled with small stones and other objects.

Karing’aring’a
This metal ring produces music when hit with a metal bar.

Fiddle( Wandindi)
The wandidi consists of a resonator and a string, with music made by pulling on the string. A calabash and a piece of tight skin are used to make the resonator. A small bow called muthage is used to play it.

Art
There is no evidence that the Kikuyu draw pictures of their huts and weapons. Their pots are also not decorated. Kikuyu art, therefore, consists of body decorations, dress, and the making of ornaments.

Body Decorations.
The women wear mugathi on their foreheads. These are black and white beads with a pendant in the middle. They also wear pellets of clay smeared with grease and red ochre on the crown of their heads. The women wear five quills in their ears.

Both men and women liberally decorate the ears. The lobes are pierced and lengthened by putting successively bigger tree branches through them. They do this until the hole is roughly the size of an orange.

Girls and boys decorate their cheeks using a vegetable dye. They draw patches in the form of stars. They paint their faces red or blue during a dance.

Deaths and Funerals in Ndebele Culture