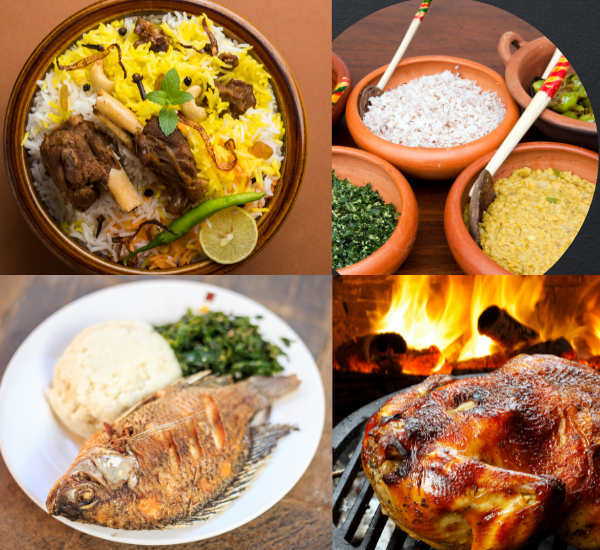 As can be found across all the Zambian tribes, Bembas live in a close-knit extended family. As earlier mentioned in all the write-ups, community living is the lifeline of the Bemba culture. Communities are held in high esteem. Hence families are mindful in how they present themselves to other people, which is reflected even in dining and hosting.   Sadly the protocols, manners, and community relationships are eroding at a fast pace in urban areas due to the mixture of cultures and the impact of foreign teachings. Dining and hosting in the Bemba tradition, like any other tribe, depends on different occasions and also events.

Below are some of the occasions and events for dining and hosting:

1. Insaka – The Men’s Gazebos – This is where elderly men and young men meet to exchange skills and ideas such as learning to hunt, make axes and hoes, basket making, fishing, and also learn about the community way of living and the history and traditions of the Bemba people.

Women take turns preparing food and serving the men in the Gazebo. But we should note that women (wives) always keep food for their husbands and young boys at home so that when he comes back from the Insaka, they can eat food properly (this shows that the woman has passed marriage teachings). A wife cannot depend on the food served at the Insaka for the husband because there would be too many people sharing the food, and the husband may not have eaten enough or eaten his favourite meals.

2. Ku Mitanda – Temporary Shelters, Insakwe (Booths) – The Bembas practice the Chitemene System of agriculture farming (Slash and Burn). They usually leave the villages temporarily and stay in the bush (Imitanda)  and make-shift booths called Insakwe (for sleeping) near the farms. Then before cultivating and planting the fields, they cut the trees, spread the branches across the field, and burn them. The ashes from the burnt branches help in reducing the soil acidity. They need to watch the fire closely so that it does not spread to nearby farms.

During this period, communities help each other to carry out the Chitemene. The host (owner of the farm)  prepares the food for people working on the farm until they have finished the slashing and burning and the field is ready for planting. Both men and women participate in laying the branches across the field in readiness for burning. During the harvest, again, communities help each other to harvest. The food is prepared and served by women.

3. Abalendo nangula nangu (or) Abeni (Visitors) – Hosting visitors is a special time in the Bemba tradition. They always use a proverb for visitors stating: Umweni (a visitor) kulu kwa mpombo takulinda pa lweno – (the visitor is like the leg of a duicker or antelope which does not last on the shelf) Meaning, a visitor is supposed to be treated well because he/she eventually leaves and will not overstay, just as the leg of the duicker or antelope will not last on the shelf because it is a delicacy,  it is usually eaten quickly.

Hosting visitors in the Bemba culture is shown by serving a whole roasted chicken to the visitors with the gizzard placed inside the chicken with other dishes. If the gizzard is missing, it means the chicken was not meant for the visitors. The visitor will also perceive they were not welcomed even if the best dishes are offered. Children are not allowed to dine with the visitors, even if they beckon the children to join them. Children are taught not to eat with visitors from a tender age. When hosting visitors, if the hosting family does not have enough bedrooms, and if the visitors are spending a night, children leave the bedrooms and unfortunately sleep in the living room or kitchen. In some cases ( community living), they ask the neighbours to accommodate the children until visitors leave. During the day, the children would spend time with the family, and at night they go to sleep at the neighbours’ houses.

Also, the best dishes and cutlery are taken out from the cupboards at mealtimes. Every home keeps the best crockery for the visitors. There is always day-to-day crockery, but usually, the best crockery is taken out only when visitors come. This practice is found both in the villages and urban areas.

Uninvited Guests or Visitors – It is a Bemba tradition always to have cooked food. The Bembas believe that visitors should never come to a house and not have anything to eat; even if a passerby is just greeting you, they should always be offered something to eat. Hence, there are always cooked dishes such as sweet potatoes, pumpkins, samp, yams, and munkoyo (soft drink) to offer someone passing by. It is taboo in the Bemba tradition to pass through someone’s house and leave without being offered something to eat.

4. Meal Times In a Home – It is the same routine. In the villages, children are usually served separately from their parents. The mother will eat with the children in most cases, but the father is served alone. The father is given particular parts of the chicken, usually the chicken’s back, thigh, and gizzard. The gizzard is a significant part of the chicken and is served to the head of the family (usually a male) and the visitors.

In the urban areas where the family usually eat together, children have to be seated before the head of the family is called to the table (on bended knees), a sign of honour and respect. The father serves first, and the rest follow seniority (both in the village and urban settings). Children cannot leave the table after eating before the elder stands up. Children clear the table, though the dishes are left to the girl child. Dishwashing is changing significantly in urban areas; boys have started helping with all chores. But in the village, this has never changed. The kitchen remains a woman’s domain.

Dishes served:  The Bemba tradition usually serves the same type of food, whether at home or events; the quantity differs. All dishes are served with Nshima (thick porridge) eaten with hands, usually rolled with fingers. Nshima is made from Maize / Sorghum / Millet / Cassava Mealie Meal. It is prepared by boiling water in a pot and adding the mealie-meal little by little until the thick texture is attained. The staple food of the Bembas is Nshima, served with different relishes. Nshima is the staple food for all tribes in Zambia.

When serving the visitors, a whole chicken is roasted. The gizzard is placed inside the chicken; this is also done at initiation and marital ceremonies. I would further state that the whole roasted chicken is served as a gesture at all important ceremonies to honour the guests or the head of the house, clan, etc.

Meat/chicken is usually boiled on low heat or cooked in peanut soup in the village. Meat / Chicken is cut into small pieces and boiled, and tomato and onions are added to thicken the soup. No cooking oil is used. The fat from the meat or chicken enhances the broth.

Okra – different types of okra are cooked in soda. It is usually slimmy. People have to make a hole in the nshima to scoop it when eating.

Beans are always present at meals because most families cannot afford chicken or meat every day; this is the common protein among the Bemba people.

Fish – different types; bream and kapenta (tiny sardines) are also part of daily meals. Usually roasted on charcoal or boiled or fried. It is preserved by sun-drying or salt drying.

Mushrooms – Most mushrooms are seasonal. They grow on their own in the forests during the rainy season. People pick them and preserve them by boiling and then sun drying them to be eaten throughout the year.   They are prepared by boiling them in peanut soup or water and salt. Most Zambian people love this relish.

Caterpillars – Fresh ones are eaten in season; out of season, the dry ones. Most people regard caterpillars as a delicacy. Caterpillars are fried in oil or a little salty water (without oil) and peanut soup. They are eaten with nshima or as a snack.

Drinks – After a meal, those who drink beer are usually served with Katata (homebrew) made from fermented millet or sorghum mealie meal. They typically leave the dough for 7 – 10 days to ferment. Then cook it in large pots on intense heat (firewood), adding water to liquify. After it is cooked, it is sieved so that only the liquid is put in drums or the goud and served as alcohol. The soft drink munkoyo goes through the same process but is not fermented for many days; there are special roots called munkoyo roots to liquefy it, and sugar is added for a sweet taste served especially to non-alcohol drinkers.

We should note that Bembas do not mix foods when they cook, so when they serve, one will find ten different plates of relish served with Nshima on the table or mat.